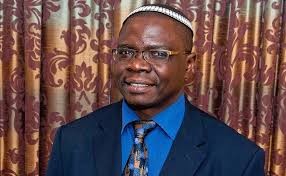 Join us for the second of a three-part series elevating voices of Jewish leaders of color in the United States, in Israel, and in Africa.

Rabbi Gershom Sizomu is the chief Rabbi of Uganda, the leader of the Abayudaya Jewish Community, and the first Jewish member of the Ugandan Parliament. The Abayudaya, whose tribal name means "people of Judah,” are Uganda's minority Jewish community of 2000 Jews. Rabbi Gershom will discuss the community's nearly 100 year history and the challenges and successes that the they have faced during that time.

Rabbi Gershom Sizomu is a Be’chol Lashon Rabbinic Fellow and the spiritual leader of the Abayudaya Jews of Uganda. Gershom is the current leader of the 100-year old Abayudaya community of almost 2,000 Jews living in rural villages in Eastern Uganda. He is the grandson of community elder “Rabbi” Samson and lives near the Moses Synagogue in the village of Nabagogye, which he and others from the community’s early 1980s “Kibbutz movement” built with their own hands. Their goal has been to gather what was left of the Abayudaya community back together after the devastating reign of Idi Amin Dada ended in 1979. As a visionary leader, Gershom’s dream was to attend a rabbinic seminary to better understand ancient and modern egalitarian Judaism and bring the Ugandan community into main stream Jewish life. Gershom was awarded a Be’chol Lashon Fellowship in 2003 to attend the five-year Ziegler School of Rabbinic Studies at the American Jewish University in Los Angeles. He returned to Uganda in 2008 as the first native-born black rabbi in Sub-Saharan Africa and opened a Yeshiva to train African teachers and rabbis to serve their ancient and emerging Jewish communities. In 2016, Gershom became the first Jew ever elected to Uganda’s parliament.