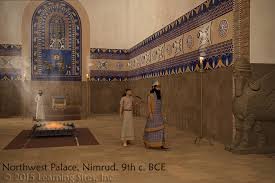 The Jewish Federation of the Berkshires presents:
Knosh & Knowledge with Donald Sanders, Ph.D,
an architect, architectural historian, and archeologist who helped pioneer
the discipline of virtual heritage in the early 1990s.

His special interest is the application of nontraditional methods (including advanced computer graphics, virtual
reality, and behavioral science techniques) to the study and visualization of the past, pushing the boundaries of
conventional archeological interpretation. His topic will be: “The Jewish People vs. the Assyrians Kings: How virtual
reality helps us understand and preserve what has now been lost.”

Says Dr. Sanders: “Occasionally throughout history, the grand scheming of one distant nation causes repercussions
across widely adjoining regions. A prime example, with relevance for this program, happened when the ancient
city states of the Levant suffered before ever-expanding Assyrian dominance. We can read about these encounters
in 1st and 2nd Kings of the Bible with corroborating discussions found on the inscriptions of King Shalmaneser III
(859-824 BCE). The repetitive westward incursions of the Assyrians reached a climax in the late 8th century BCE,
when King Sennacherib’s army swept across all in its path right up to the doors of Jerusalem, where the destructive
wave was stopped.

Again, we are provided with stirring biblical accounts and matching Assyrian evidence in Sennacherib’s inscriptions and graphic depictions of the events carved on the walls of his Palace Without Rival, at Nineveh (Iraq). “Fate’s misfortune has decreed that the historically and culturally important remnants of that ancient Assyrian power should now itself become the target of willful demolition by ISIS, with the sole purpose of wiping Assyrian sculpture and architecture from the pages of history. Fortunately, we can digitally document and preserve archeological evidence
so that future generations can continue to study, learn from, and virtually revisit the past in unprecedented detail.”

In this program, Sanders will discuss how his companies’ 3D re-creations of ancient Nimrud and Nineveh
(in modern Iraq) have become eerily relevant lately not only for understanding the empire’s capital cities, but also for
contextualizing biblical stories that were turned into historical realities by the 19th-century discovery of cuneiform
inscriptions. Sanders has been working for 20 years on innovative ways to use the near first-person experience of
virtual reality to understand, teach, display, broadcast, and publish information about the past for schools and museums,

He founded Learning Sites Inc., in 1996, and the Institute for the Visualization of History Inc., in 2001, both of
which use interactive computer graphics for the collection, analysis, and dissemination of information about ancient
material culture for research, education, publication, broadcast, and museum display.