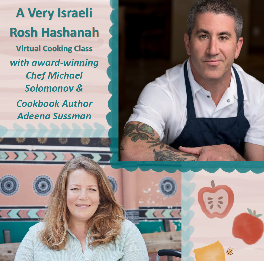 Registration to Come - Event link, password, and recipes will be sent prior to the event. T

Chef Michael Solomonov was born in G'nai Yehuda, Israel and raised in Pittsburgh. At the age of 18, he returned to Israel with no Hebrew language skills, taking the only job he could get – working in a bakery – and his culinary career was born.

Chef Solomonov is a beloved champion of Israel's extraordinarily diverse and vibrant culinary landscape. Along with Zahav, Solomonov’s village of restaurants include Federal Donuts, Dizengoff, Abe Fisher, and Goldie. In July of 2019, Solomonov brought another major slice of Israeli food culture to Philadelphia with K'Far, an Israeli bakery & café. In November of 2019, Solomonov opened Merkaz, an Israeli pita sandwich shop, and in February of 2020 opened Laser Wolf, an Israeli skewer house.