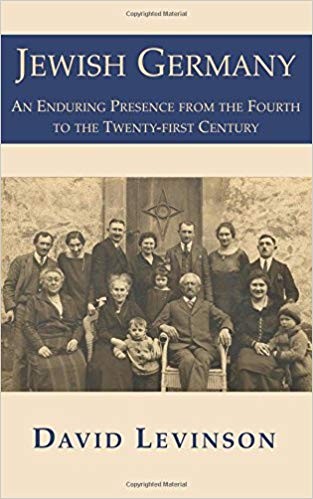 The Jewish Federation Connecting with Community presents "The German Jewish Experience with David Levinson, PhD, a cultural anthropologist, author and son of a Holocaust survivor.

This three session course covers the history of the Jewish experience in Germany from the 4th century CE to present times.  This program will take a lecture/seminar approach with audience participation encouraged.

Session 1 (Monday, April 29) will cover the long period from the 4th century to 1800 with a focus on the major elements of German and Jewish life which defined the Jewish experience.

Session 2 (Thursday, May 2) will cover the years 1800-1933, a period of enormous transformation for the German Jewish community, including immigration to the US, movement from the towns to the cities, emergence of a Jewish middle and upper class and the development of Reform Judaism.

The final session (Monday, May 6) will cover the Holocaust and post Holocaust periods including emigration from Germany, the lives of Jewish German refugees, and Holocaust commemoration.

Co-founder of Berkshire Publishing Group, David Levinson, PhD specializes in contemporary social issues. Formerly vice-president at Yale University's Human Relations Area Files, an anthropological think-tank, David became "well-known for his multivolume encyclopedic works that describe world cultures" (Choice 1998).  After three years as a medic in the US Army, he received a BA from Montclair State College and then an MA and Ph.D. in cultural anthropology from SUNY/Buffalo. Levinson also holds a master's degree in Public Administration from New York University. He currently lives in New Haven, Connecticut.