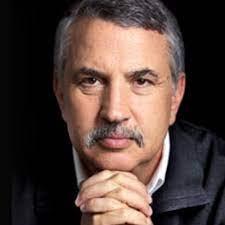 Join us for an evening with acclaimed author Thomas Friedman as he discusses the big trends shaping the world today: Economics, Technology, & Geo-Politics.
Bestselling author of The World is Flat and New York Times foreign affairs columnist Tom Friedman is renowned for his direct reporting and accessible analysis of complex issues shaping the world. According to Foreign Policy magazine, “Friedman doesn't just report on events; he helps shape them.” Winner of three Pulitzer Prizes, he has covered the monumental stories from around the globe for The New York Times since 1981. Vanity Fair called him “the country’s best newspaper columnist.” In his latest bestseller, Thank You for Being Late: An Optimist's Guide to Thriving in the Age of Accelerations, Friedman offers a blueprint for overcoming the stresses and challenges of a world being transformed by technology, globalization, and climate change.

Thomas L. Friedman is an internationally renowned author, reporter, and, columnist. He is the recipient of three Pulitzer Prizes – two for international reporting from the Middle East and a third for his columns written about 9/11. He is the author of seven New York Times bestsellers — From Beirut to Jerusalem, The Lexus and the Olive Tree, Longitudes and Attitudes, The World Is Flat, Hot Flat and Crowded, That Used To Be Us (with Michael Mandelbaum) and, most recently, Thank You For Being Late.

It was a visit to Israel with his parents during Christmas vacation in 1968–69 that stirred his interest in the Middle East, and it was his high school journalism teacher, Hattie Steinberg, who inspired in him a love of reporting and newspapers.  Fun fact: St. Louis Park was immortalized in the 2009 Coen brothers movie, A Serious Man. Friedman, Ethan and Joel Coen, Senator Al Franken, political scientist Norman J. Ornstein, former NFL football coach Marc Trestman, Harvard University philosopher Michael J. Sandel and author Peggy Orenstein all grew up around St. Louis Park in the 1960s and early 70s — and most of them went to St. Louis Park High School and the local Hebrew school. The Coen brothers once compared St. Louis Park to the small region in Hungary that had produced numerous nuclear physicists and Draculas.

Friedman earned his B.A. from Brandeis in 1975 and was awarded a Marshall Scholarship by the British government and earned an M.Phil in Modern Middle East Studies from St. Antony’s College, Oxford. He started his journalism career with UPI on London’s legendary Fleet Street in 1978. After serving as a Beirut reporter for UPI for two years he was hired by the New York Times in 1981, where he served as the Beirut bureau chief, Jerusalem bureau chief, chief diplomatic correspondent, international economics correspondent, and, since 1995, its foreign affairs columnist.