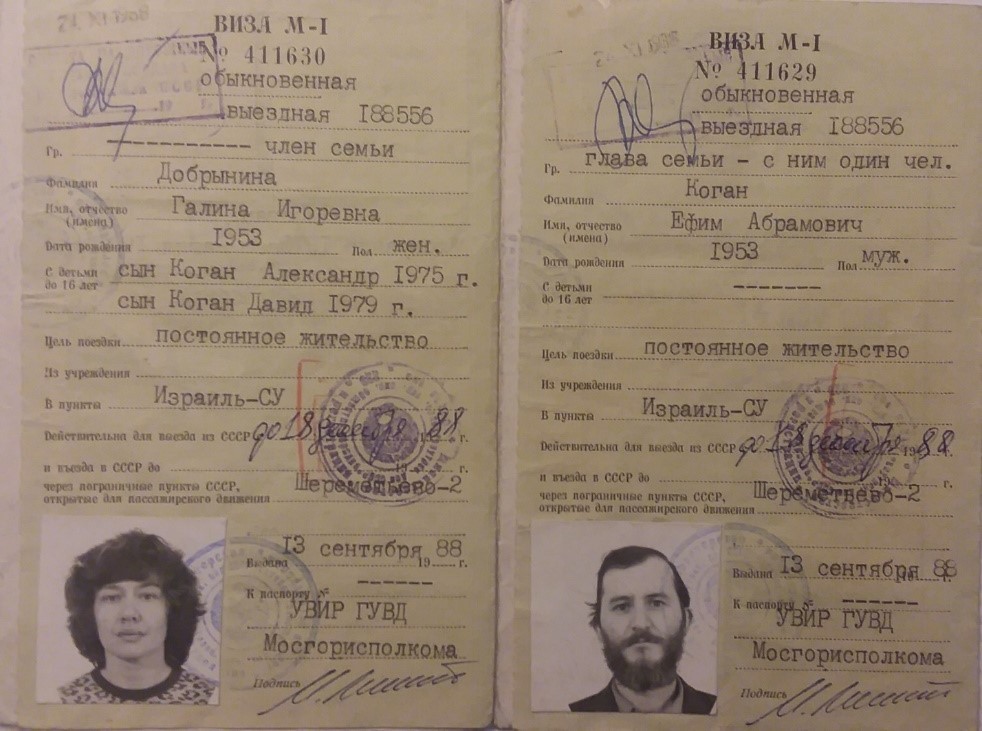 By Yefim Kogan / Special to the BJV

When Jews from the former Soviet Union like myself immigrated to America, we experienced something we had never experienced while living in the USSR…we became “Russians.” It was always puzzling to my friends and me.

In the Soviet Union, no one in their right mind, Jew or non-Jew, would have ever thought of identifying Jews as “Russians”! It seemed to us that everybody somehow knew whether we were Jewish even without opening our passports – say, an employer trying to hire a software engineer or an admission committee considering a prospective student. But when they did open our Soviet passports, they would see a very important line on those documents, the one labeled “Nationality.”

Here are two definitions of “nationality,” a term so very important to the Soviets (although keep in mind that there are multiple nuances to both definitions):

By the first definition, the “nationality” of not only the Jews but of everyone else living in the Soviet Union should have been “Soviet” because we all were citizens of the Soviet Union. However, that was not the case for any person – there was no such thing as a “Soviet” nationality. In the USSR, the state employed the second definition, “ethnicity,” not only for the Jews but also for everyone else.

Was it a big deal to have “Jewish” in your passport? Yes, that made a HUGE difference:

And so much more. Here is a quote from the book When They Come for Us, We’ll Be Gone: The Epic Struggle to Save Soviet Jewry by Gal Beckerman, who catches the essence of having the Jewish stamp in one’s passport. “Every Soviet citizen was required to carry an internal passport at all times,” she writes (although this rule was never really enforced):

[I]t gave basic identifying information and, more important, the bearer’s propiska, the place where he or she was officially registered to live. On the fifth line of the passport was a space for nationality; for most, this was the place to indicate the republic, language, and culture the individual was ethnically connected to: Ukrainian, Georgian, Latvian, Russian. But for 2,267,814 Soviet citizens, the fifth line read Jewish, and it indicated only one thing: difference.

Who were we in the Soviet Union? A Jew might be born in Russia or be from Russia, but no one would say that the person is “Russian.” I was born and spent my first 17 years living in what I think of as the infamous city Kishinev, in what is now the Republic of Moldova – but I am not, and was never, Moldovan. When we were children, believe me, the neighborhood kids told us who we were. When we applied for a job, we understood who we were. We were Jews, and we were different, and we felt that all the time.

Today, I think of Kishinev in the way our grandparents might have remembered the shtetls in which they grew up – places that changed completely, that now bear no reminders that half or more of the population was Jewish. Because I was never “Moldovan,” I feel no connection to the town in which I was born and in which I lived, even though as part of my work with JewishGen.org, I frequently deal with Jews and non-Jews in Moldova. Kishinev has changed – while many Jewish aid organizations operate there, there are very few Jews left.

How do I think of myself now? As an American born in Kishinev, Soviet Union. But how will history understand the identities of people born within the Russian Empire and the Soviet Union and who then left? The question presented itself when my wife and I visited the Williams College Museum of Art. We saw several pieces by Marc Chagall, whose work we love. The way his work is labeled surprised us, though – at the museum, the label reads ‘Marc Chagall (French, born Belarus, 1887-1985).’ So Chagall lived in Paris, and he was a French citizen. But what does “born Belarus” mean here? If it means that he was born in Belarus, that is not correct. There was no Belarus either as a country or entity in 1887. Could his nationality/ethnicity really be ‘Belarus?’ I do not think so.

I decided to find out how other sources described his nationality.

The YIVO Encyclopedia provides a good, though perhaps incomplete introduction: “Chagall was born Moyshe Shagal (officially, Movsha Shagalov) in the Russian city of Vitebsk (Vityebsk, now in Belarus) on 24 June 1887.”

Finally, Wikipedia gives what, in my opinion, is a better introduction: “Marc Zakharovich Chagall was a Russian-French artist of Belarusian Jewish origin.”

Here is how I think the labels on Chagall works should be written: “Marc Chagall, French, born in Vitebsk, Russia, 1887-1985 of Jewish descent” – because to the Russian authorities, he would not have been considered ‘Belarusian.’ His nationality would have been ‘Jewish.’ What’s more, I doubt he would have thought of himself as Belarusian – although it is abundantly clear he thought of himself as Jewish.

Russian Empire passports before the 1917 revolution, like those of some other European countries, had a line that read “Religion”; Jews and others were identified by their religious backgrounds. Back then, passports were uncommon – only people who traveled from one place to another, primarily merchants, had to have them. Foreigners living in Russia would have had passports from their home countries, stamped with Russian visas. Some Jews traveled from Russia to other countries to study and were issued passports, as well.

In 1903, at the beginning of the communist-socialist era in Russia, Vladimir Lenin wrote that an idea of Jewish nationality contradicts the interests of Jewish workers. He added that assimilation was the only possible way to solve the Jewish question. Perhaps Lenin had a notion that an assimilated “Soviet” citizen might emerge from the many ethnicities living within the USSR in time. Note that in every US passport, there is also a line that reads “Nationality.” That line reads ‘United States of America’ for every citizen. There is nothing about ethnicity – as far as this country is concerned, we are all “Americans.” In the USSR, however, there would never be a truly “Soviet” citizen.

Americans associate their passports with international travel, but in the Soviet Union, a passport was the only official identity document one had, even though Soviet citizens were rarely allowed to travel abroad. Jews in particular, with few exceptions, could not leave the country. And so the question remains: why did the Soviets, despite Lenin’s early thinking about assimilation, identify their citizens’ nationality on their passports? What changed their minds?

I believe it was because the oppressive Soviet authorities needed to know who was different, who might threaten their total control over the population. And in both the historical Russian worldview and the new communist way of thinking, Jews were forever “different.”

I want to share how I tested Soviet rule while I was a teacher in a Moscow school in 1975. In the Soviet Union, your passport was issued when you were 16 years old; on it, your nationality was identified. When a person was younger, however, he or she had to declare their nationalities to their schoolteacher, who recorded it in a class journal. In my first year as a 21-year-old teacher, I refused to fill in the nationalities of my students – I left that column empty. I felt as if I would not get into trouble, because no one cared about such distinctions anymore. But I was wrong – the school’s administration knew the nationalities of all students from other papers their parents had filed. They knew exactly who was different – and treated them that way.

Reproduced in the image above are examples of the last document many Jews received from the Soviet government – a visa to go abroad. When Jews expressed the desire to emigrate from the Soviet Union, the government stripped us of citizenship and took away our all-important passport, replacing it with a visa that we had to pay for. (In the photo at the top of the page, my visa is on the right, the shared visa of my wife, Galina Dobrynina, and our children is on the left.) As we waited for the chance to leave, we could not work, and our children could not go to school – in fact, the teacher of our 9-year-old son, David, told his class that he was an enemy of the state. (And this was in 1988 – perestroika!)

My family left the USSR in 1989 and made a new American life in Boston. Some people still may think of us as being of “Russian” origin, although nothing could be further from the truth. We are also sometimes asked why we worked so hard and risked so much to leave the USSR? These people may think that we were “citizens” of the Soviet Union – but as the “Nationality” line on our passports show, we were just “Jewish” as far as the state was concerned.

And that is why we left the Soviet Union.

Yefim Kogan, who summers in Lee, is the JewishGen.org Bessarabia group leader and coordinator. This article is based on research for a presentation at the 39th International Conference on the Jewish Genealogy in Cleveland in the summer of 2019.