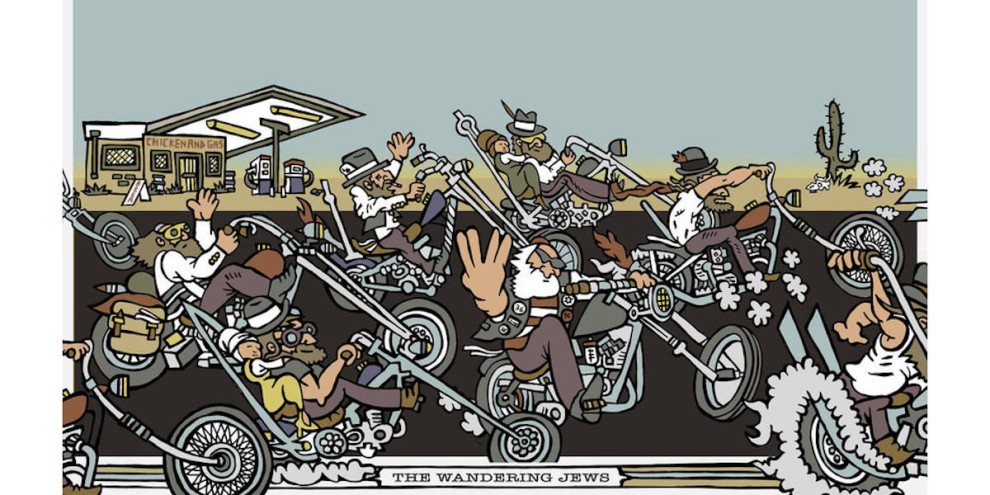 Fun and fantastical drawings, sculpture, and Judaica by Steve Marcus at the Yiddish Book Center

It is more likely the instinct of the Jews to be attracted to large whole detailed views of society, to seek intellectual specifications of the social machine, and to enter precisely those occupations which subtly can offer institutional, personal, and legislative possibilities to a man of quick wit and sensible cohesive culture.

From Norman Mailer’s reflections on Martin Buber’s Tales of the Hasidim, published in Commentary in 1963

AMHERST – Happy are the people who encounter the “Kosher cartoon folk world” of artist Steve Marcus that is now on view in two exhibits at the Yiddish Book Center, Tales From the Golden Medina and Through the Hat.

When I took in the shows in late August, I lingered in the galleries to watch folks laugh with surprise and delight at their first impressions of the artist’s bygone Lower East Side cityscapes teeming with traditional Jews. Then, I enjoyed the way they laughed some more as they looked more closely and picked up on the sly jokes Marcus embeds in his work, such as the sculpture of nine Hasidic men titled “No Minyan.” Marcus also depicts traditional Jews engaged in decidedly non-traditional Jewish behaviors, such as cruising through the desert like Hell’s Angels on their “hogs” (i.e., Harley-Davidson motorcycles, which violate no dietary laws) and slam-dancing the hora in a punk rock mosh pit (perhaps not all that different from a Hasidic wedding reception).

Marcus’s exuberant work demonstrates his affinity with the bearded and behatted immigrant Jews who filled lower Manhattan a century ago, people rooted in an Eastern European sensibility of religious cohesion and cultural distinctiveness, but who are hustling to make it in America, a golden land of freedom, opportunity, and abundance. Marcus’s bustling Lower East Side streets are the kind of “social machine” that Mailer imagines in his ruminations on Buber, and the traditional Jews he draws are occupied with seizing New World possibilities.

Marcus’s work is not merely Lower East Side nostalgia, however; it is also imbued with a deep feeling for and understanding of Jewish practice, thought, and spirituality. Marcus describes himself as “a Jewish guy who lives a Jewish life.” Since 2010, he has studied Jewish scripture and texts at Mesivta Tifereth Jerusalem, a renowned yeshiva located on the Lower East Side, a neighborhood where he has kept an apartment for close to 30 years. The work on view at the Yiddish Book Center, he says, is a convergence of artistic, personal, and spiritual paths he has traveled.

Early in his career as a commercial artist in the 1980s and 1990s, Marcus worked in the underground art style that emerged from the late 1960s California counterculture – according to his website smarcus.com, he collaborated on projects with icons of the San Francisco scene such as Allen Ginsberg, Ken Kesey, and Timothy Leary. His artwork – steeped in “popular culture, though depending on someone’s position, they could call it ‘unpopular culture’” – received awards from the American Society of Illustrators and appeared in numerous mainstream publications and MTV. Notably, he contributed to High Times, a magazine that has covered cannabis culture since the mid-1970s. He created two posters for the publication's infamous Cannabis Cup, a global championship of the best marijuana products. Through those assignments, he got to know the magazine’s then-editor, John Buffalo Mailer, Norman’s youngest child.

John Buffalo introduced Marcus to his father’s writing about Martin Buber’s Tales of the Hasidim, a series of reflections published in the early 1960s that were inspired by the author’s reading them while “riding the electric rail of long nights on marijuana.” Mailer, who received a Jewish education growing up in Brooklyn, wrote that Buber’s classic stories “were the first bits of Jewish devotional prose which were not deadening to me. Out of the cave of history came a thin filament of the past, the first to which I paid attention.” Now obscure, these essays (available on the Commentary website) are vivid, provocative, passionate, and a lot of fun, as well as being unusual in Mailer’s output in dealing with explicitly Jewish subject matter. (Marcus says that it wasn’t until later in life that the author renewed his interest in Jewish subjects – “not necessarily like he was going to the morning minyan or anything… and not necessarily that he ever said this, but it’s like he was kind of returning to his source, to his roots in some way, which is very interesting.”)

John Buffalo told Marcus: “You have to do some artwork to this, because who else could navigate the Hasidim and the counterculture?”  The product of that initial engagement with the Mailer/Buber essays was a series of fine art prints titled "Norman, Martin, and Me," which are visually more in a countercultural vein than ostensibly Jewish, but nevertheless marked a turning point for Marcus.

“Because of the world we live in now and because of my own personal life,” he says,  “I started to only create Jewish art, but not abandon my own artistic route, which is counterculture art and underground comics and that kind of thing. The Buber/Mailer project was one of the first projects that I felt excellent about that was able to really build a bridge that connected to my past and my present into the future.”

In one of his commentaries, Mailer wrote: “Consider this: every inanimate form in nature is the record of a war — the shape of a stone reflects the obduracy of the material versus the attrition of the elements.” When I read that line, I thought of the Lower East Side tenement buildings that housed Jewish immigrants a century ago and still stand today. Over the years, they provided shelter to succeeding waves of ethnic groups who remade the neighborhood to their own needs. While the character of the neighborhood evolves, the buildings, those inanimate forms, endure. My father was one of those Jewish immigrants, having arrived from Romania as a five-year-old in the 1930s. His childhood struggles all played out against a setting I can visit today, and when I do, I can’t help but imagine those still-grim tenements through his eyes.

There’s not much grimness in Marcus’s vision of the Lower East Side, though – it’s a backdrop against which the Jews of his imagination are frenetically living their best lives. The stores are filled with merchandise and customer, food shops overflow with Jewish delicacies, pedestrians seem to be on their way either to or from shul, signage is in Yiddish and English, and no trace of reality outside of a Jewish universe seems to even exist. Things must have once felt like that, particularly in the early 1900s when, as Marcus points out, “the Lower East Side was the most densely populated area on the Planet Earth.” Photographer Sid Kaplan, a friend of Marcus’s who contributed photographs to the show, perfectly characterized the delirious riot of Jewishness the artist portrays as being a kind of  ‘Calder’s ‘Circus for Yidden.’”

Marcus has seen many of the neighborhood’s changes firsthand, having visited the neighborhood first as a child, after most of the Jewish residents were already gone, but when many of the stores that met their needs remained – the pickle and knish shops, restaurants like Ratner’s, and religious goods emporia such the one Marcus remembers going to before his bar mitzvah. As a teenager and young man, Marcus came to the Lower East Side for the music and art scenes. Now, as a middle-aged man, he says: “You don’t want to sound like you’re 180 years old saying that ‘this used to be where this was’ and ‘this used to be where that was,’ which I do, sometimes. I definitely don’t want to use such an extreme word, like ghostly, but that is a good way to describe it. It’s like the specter of the past that is looming and lurking in all these places.”

Just because Marcus’s drawings and sculptures draw on sources like cartoons and underground art doesn’t mean they lack intellectual depth. Marcus takes the title of his “Through the Hat” exhibit from one of Buber’s tales about

a zaddik in the city who was versed in reading faces, and could tell the quality of the soul by looking at the forehead. The next visitors pulled their hats down to their noses. “You are mistaken,” Rabbi Mikhal said to them. “An eye which can see through the flesh, can certainly see through the hat.”

Likewise, beneath the playful surface of Marcus’s artwork, someone versed in the halacha (Jewish law) regarding artwork will recognize that the artist adheres to rabbinic strictures on what images may and may not portray.

“I follow Jewish law in creating the art,” Marcus explains, and points to his drawing of Hasidim on motorcycles I referred to earlier ('The Wandering Jews'). “It’s got this motorcycle image going through the desert, like some Hasidic ‘Easy Rider’ looking thing. The thing that’s missing from it is that big yellow circle or orange circle that shows the sun. Right? Because everybody, even kids, sits down and draws that big circle to represent the sun. And in Jewish law, we’re not allowed to create two-dimensional drawings of the sun, the moon, or the celestial bodies and things of this nature. So that’s a good example of a drawing that’s following the rules. The sculptures – none of them are full figures. None of them really have arms or legs – they’re busts, which we’re allowed to create – but we’re not allowed to create a full figure.

“Why do I do all this? Not only for my own beliefs, but to be inclusive. So if someone’s very religious, let’s say like the Satmars who came [to a show in Florida]. And they said, ‘Who is this artist guy?  How does he know this?’ They could tell right away that the artist that made this art knows these rules. At the same time, if someone isn’t religious and doesn’t know any of this stuff, and they’re Jewish, they look at it and go, ‘Wow, that’s really cool. That brought up these amazing feelings of the Lower East Side of my Jewish upbringing.’ And they feel a connection to it just at a cultural level or at some tribal level.

“One of the things that I think is a big issue is the schism among the Jewish people – religious versus secular. It’s like that in Israel; it’s like that here. The thing is that through the artwork, by making it accessible to everybody, I’m pulling people, the Jewish people, a little closer together.

“Now, the fact is, if you’re not Jewish right at all, you could still look at it and go, ‘Wow, this is cool art’ and that it represents Jewish people and Jewish culture. And in this modern world of cancel culture and all this type of cultural appropriation, the Jewish people need a little bit of a better PR program and a better ambassador. Ambassadors to the world, and for people to look and say, ‘Wow, that’s cool Jewish art.’

“And to me, that’s also an important thing to create artwork that’s accessible to people that aren’t Jewish either, that they enjoy it. So in a way, I’m trying to do it, find that sweet spot that touches everybody.”

For more on Steve Marcus, visit his website at smarcus.com.