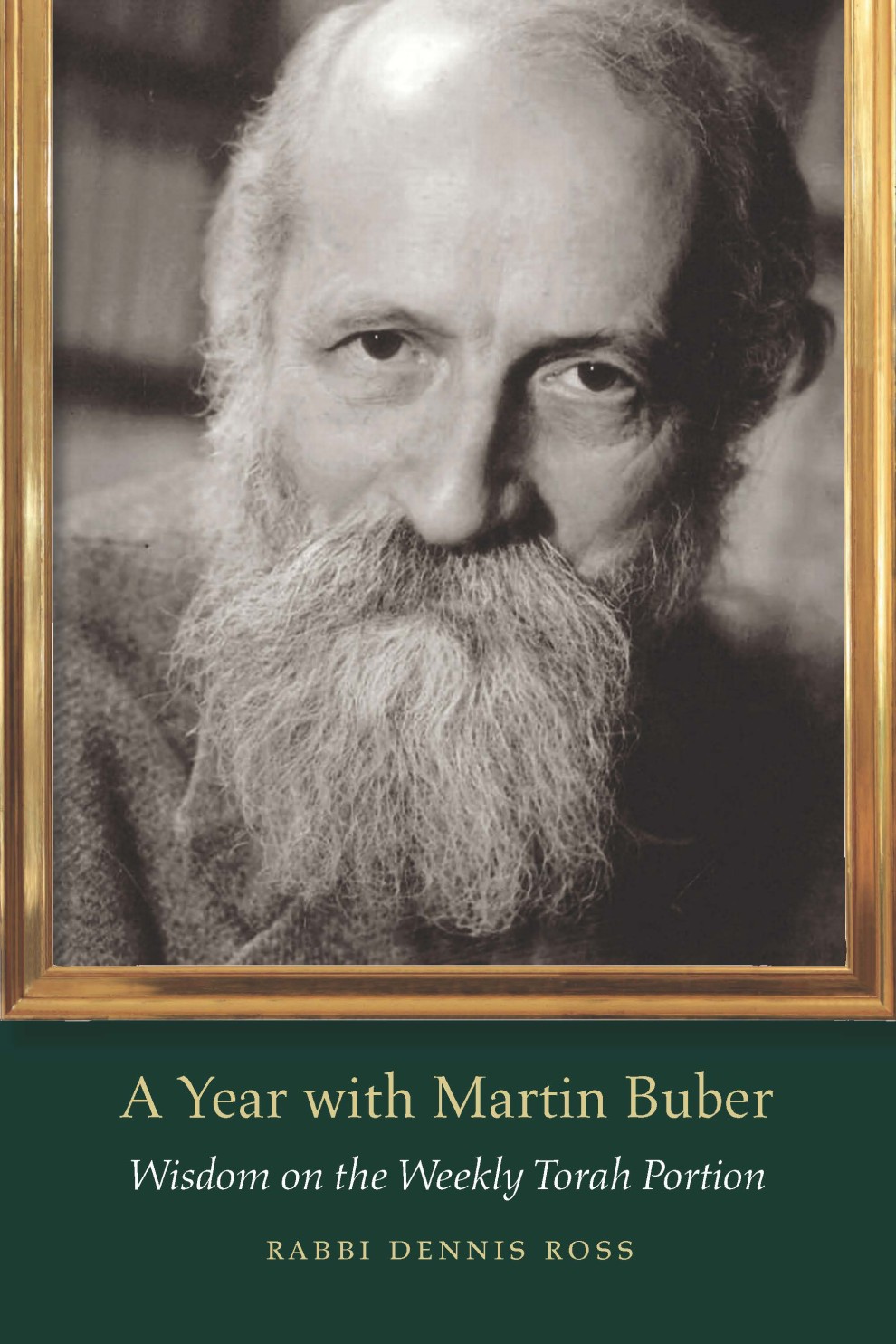 As Rabbi Dennis S. Ross admits in the introduction to his new book, A Year with Martin Buber: Wisdom on the Weekly Torah Portion, the writings of the great 20th-century Jewish thinker make for difficult reading. In Buber’s masterwork, I and Thou, his “voice is cryptic, poetic, wandering, and rapturous, all at once. Some say he enjoyed going out of his way to make simple ideas sound complicated.”

While Buber’s prose is abstruse, Ross reveals how his message is approachable, relevant, and informed by a deep connection to Jewish thought. Though “I and Thou never mentions Jewish texts or teachers to support [its] arguments, thereby opening it to criticism,” Ross shows how Buber’s teaching is on a continuum with Leviticus 19:18 (“love your neighbor as yourself”) and Rabbi Hillel (“This is the whole of the Torah; the rest is commentary”).

In I and Thou, Buber holds that “All real living is meeting.” Writes Ross: “For Buber, a true ‘meeting’ with others involves what he calls ‘inclusion’—that is, seeing both sides of a relationship, yours and mine, simultaneously.” The relationships we form, both deep and fleeting, are all spiritual opportunities. “This I-Thou moment of divine revelation is the foundation of Buber’s examined Jewish living, the basis of his utopian social vision, and his key to all that is spiritual and everlasting,” explains Ross. “We meet each other, love each other, and love God, all at the same time.”

A Year with Martin Buber is part of The Jewish Publication Society’s Daily Inspiration Series, which explores the ideas of Jewish thinkers through chapters on each weekly and holiday Torah portion. Ross breaks down each chapter with an overview of the parsha’s plain meaning (p’shat). He then provides two interpretations (d’rash), one exploring Buber’s thought and the other reflecting his own lived experience. Excerpted below is the chapter on Parshat Yitro, which will be read this year on January 22.

Creation, Redemption, and Revelation are the Torah’s centerpiece happenings. God creates the world, redeems Israel from Egypt, and now, in Yitro, reveals the Torah at Mount Sinai. The capstone of the Revelation, the Ten Commandments, open with, “God spoke all these words, saying, ‘I am Adonai your God’” (Exod. 20:1–2).

The sum of Jewish teaching flows from this mountainside moment between God and Israel. As Rabbi Yitzhak says: “Whatever the prophets of the future prophesied, it was all received at Sinai” (Midrash Tanhuma Yitro 11). Moreover, the Rabbis maintain that the Revelation embraces everyone and everything—Israel, humanity, and the universe—through all time.

The Rabbis imagine that each generation of Israel—every Jew that ever lived or will live—stands together at Sinai (Midrash Hagadol, Deut. 29:12), thus underscoring the centrality of Revelation. The Revelation also resonates in the heavens. The Rabbis teach that, while the angels jealously hoped to keep the Torah for themselves and out of human hands, Moses defends God’s decision to give the Torah to Israel, asking the angels, “Did you descend from Canaan to Egypt for Pharaoh to enslave you?” (Shabbat 88b). The Torah is worthy compensation for Israel’s four centuries of bondage, an ordeal the heavenly angels avoided.

The Revelation also garners attention in all of earth’s corners, affecting the natural order and all living things. In the name of Rabbi Yoḥanan, Rabbi Abahu teaches that, when the Torah was given, birds stopped chirping and flying and the sea’s waves ceased: “The world went entirely silent when the Voice went out” (Exod. Rabbah 29:9). The Revelation impacts Israel, all people, and the entire world.

What happened once happens now and always. And the fact of this
happening to us is a guarantee of it having happened.

Buber brings a unique Jewish approach to this highlight moment in Jewish history. The Rabbis imagine that all Jews—past, present, and future—were there at Sinai. And Buber brings each of us to that mountainside that very day by teaching that whenever you and I speak as I-Thou, we speak with God, just as Israel did at Sinai.

Revelation is ongoing for Buber, even as he seems to contradict himself when he teaches that each encounter is unique.5 So, the question becomes, “How can a one-of-a-kind event repeat itself ?”The resolution to this question has to do with Eternal Thou. On the one hand, each I-Thou is discrete, never to recur. On the other hand, each and every I-Thou brings us into God’s presence in Eternal Thou. To be sure, the existence and workings of Eternal Thou are as unprovable for Buber as that moment of Sinai is for the Rabbis. Nevertheless, Buber sees both as “fact.” Each one of our unique, kindred conversations is made of the same spiritual substance as our collective time with God at Sinai.

The Bible is filled with these kinds of self-contradictions and paradoxes, and Buber accepts all of them as “fact.” He takes the Bible seriously, not literally. He doesn’t fret over the specifics of the Sinai miracle—or over talking snakes, great floods, or any of the Bible’s other wonders. He tells us that the people thought something remarkable happened. They turned from their rational side to their spiritual side and used the term “miracle” to describe what they saw.

In the Bible’s era, in Buber’s time, and in our day, we witness things that defy understanding and explanation. Sometimes, what actually happens is less important than what we make of it. On these occasions of astonishment, awe, or wonder, a person’s rational inclination yields to their mystical inclination in the attempt to make sense of the inexplicable.

Similarly, the Hebrew Bible can be said to reflect the difference between Jewish history and Jewish memory. For those of us, including myself, who view it in such a way, the text has less to do with what actually happened and more to do with recollection: what we think and say about events.

Buber cherishes the Bible as a record of the conversation between Israel and God. He also affirms that we speak to God by speaking with each other, and the Revelation we gain from one another at any point in history is as truthful as the Revelation at Sinai.

To be Jewish is to embrace a paradox. It requires the summoning of all one’s heart, soul, and strength to love and believe—without any basis in fact.

I unknowingly entered this paradox as a kid when I went to yeshiva, a school that was really two competing schools in one. In the morning we went to “Hebrew” school—as we called it—where rabbis described a real Garden of Eden and showed us what they believed to be the likely spot where it had been on a modern map. We learned that the earth is no more than six thousand years old, meaning natural wonders like the Grand Canyon came from Noah’s flood, and that people aren’t descended from monkeys—God made us as we are. Fossils? God put them there to test your faith, to find out whether you believe in the truth of Torah or in scientists, who got it wrong. In the afternoon, after lunch, we had “English” school—science, math, history, and more, with teachers who could have taught in my neighborhood Brooklyn public school.

Rarely did anyone raise a question about how to reconcile it all, how a Jew could possibly balance the conflicting truths of Torah and science. In third grade, a classmate did ask the Rebbe how we know the Torah is true. The Rebbe responded, “We know that the Torah is true because the Torah says it’s true. The Torah tells us that there were 600,000 witnesses at Mount Sinai. How can 600,000 people be wrong?”

Even as a kid, I knew it was more complicated than that.

As I got older and involved in Reform Judaism, my early childhood yeshiva learning stayed with me, Torah alongside evidence-based science. In rabbinic school, I learned about the “documentary hypothesis,” which rose in popularity in Europe just before Buber’s time and became more widely upheld over the years. Looking at documented history, culture, and archaeology to explain how people wrote and compiled the Hebrew Bible, various experts offered different theories culminating more or less in the conclusion that the Hebrew Bible was written by more than one author—more likely, several sources over several centuries—and the text was compiled, edited, and reedited until it reached the form we know today.

To me, there is something wonderfully liberating about the progressive approach to Judaism that recognizes the truth of Torah on one hand and the truth of lived human experience—science, history, philosophy, culture, relationships, and more—on the other, and doesn’t obsess about how or why.

Religion is based on faith; it’s not rational. No one should expect it to be provable, scientific, or logical. One can love both Torah and science at the same time, as I do, without worrying about being unable to reconcile the details and conflicts. Ultimately, the real question isn’t one of how the Torah came to be. I want to know what the Torah, the Rabbis, and modern interpreters teach about how to live.

Rabbi Ross has also authored God in Our Relationships: Spirituality between People from the Teachings of Martin Buber and All Politics Is Religious: Speaking Faith to the Media, Policy Makers, and Community, and he has written for the New York Times, the Boston Globe, The Forward, and other publications. He supports synagogues across the Northeast as an Intentional Interim Rabbi. He is a Lenox resident and married to Rabbi Deborah Zecher, rabbi emerita of Hevreh of Southern Berkshire.